Previous Next
Video- The renowned American researcher Dimitri Christakis, about the virtual environment influence on neuropsychological development of children.

Dr. Dimitri Christakis, is a pediatrician professor, director of the Children’s Health Institute at the University of Washington and pediatrician at Seattle Children’s Hospital. Dr. Christakis is the author of over 100 original research articles and a pediatric manual, is an international child and media expert. His research focuses on the effects of the media on child health and development and was presented in Anderson Cooper 360 on Today Show, ABC, NBC and CBS, as well as in all major national newspapers. Member of the American Academy of Pediatrics.

The time spent by their children in front of the TV is for most parents a taboo subject, often charged with guilt.

If you’re like most of parents, you’ve probably used the TV at least to get some moments of peace, leaving the little one among the bright colors and sparkling graphics of the cartoons.

In children, science suggests that exposure to television can adversely affect brain development. Thus, the American Academy of Pediatrics advises parents to abstain from watching TV until the age of 18 months.

For children aged 6 and older, the American Academy of Pediatrics recommends setting family guidelines around a healthy lifestyle that includes physical activity, good eating habits (including family meals), adequate sleep and time face to face with friends and family.

As reported in Pediatrics Journal, in April 2004, researchers at the Children’s Hospital in Seattle found that the more a child between one and three years spends more time in front of a television, the more likely it is develops attention problems until the age of seven.

Every additional hour per day of television increases the risk of concentration difficulties by 10% compared to that of a child who has no TV contact at all. Excessive vision was associated with a 28% increase in attention problems.

Obviously, this study has unleashed a storm of controversy. The lead investigator, Dimitri Christakis, MD, associate professor of pediatrics at the University of Washington and co-director of the School’s Health Institute, acknowledges that his study was limited.

Thus, the study aimed watching TV at issues of general attention, rather than at diagnosed ADHD. Study participants were not asked if their children had ADHD. Instead, the study looked at five types of attention difficulties, including “obsessive concerns” and “confusion,” none of which were the basic symptoms of ADHD.

What can we do? 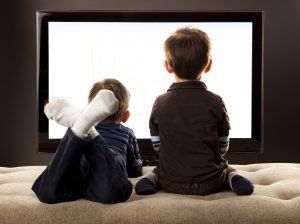 However, the Seattle study was a wake-up call. According to Dr. Christakis, moving images on TV and video games can revive the brains of very young children, making it difficult to focus on slower tasks that require more thinking.

Researchers say the TV can at least temporarily leave in motion the pre-frontal cortex centers in charge of organizing, planning, and sequencing thinking.

Here are some recommendations: