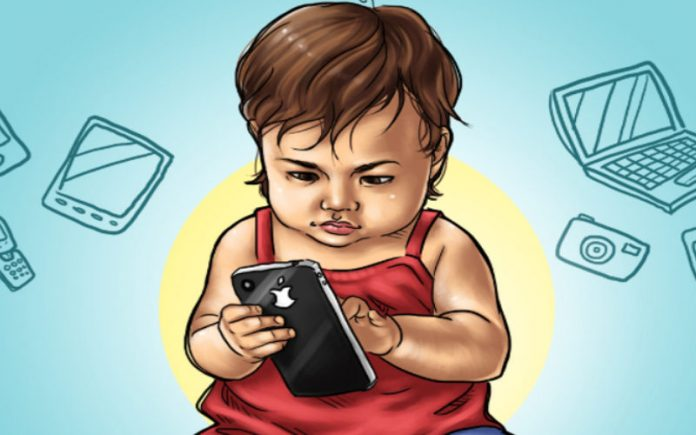 In recent years, smart phones have captured all of humanity. From children just a few years to the elderly.

These phones have changed society in a way that no one would have expected, but researchers believe that a smart phone offered to your child is equivalent to a gram of cocaine. Looks like addiction is the same.

It can be more serious than drug or alcohol addiction

Mandy Saligari, a rehabilitation clinic specialist in London and a child psychologist, talked about some discoveries that will make you think.

Saligari says: “I always tell people that when giving their children a tablet or a phone is the same as giving them a gram of cocaine or a bottle of wine.”

She claims that when children or adolescents spend time chatting with friends on Snapchat or Instagram, they form an addiction same as  alcohol or drug addiction.

In a recent study of children aged between 12 and 15 years old, it has been shown that they were finding it difficult to adapt to a real life without a smartphone.

Saligari is opposed to the use of mobile phones by children or adolescents, as it has seen an increasing demand for addiction services among children and adolescents.

With addiction to technology, there were side effects that he had never seen before. With free access to various applications, the child pornography rate has increased. No wonder that adolescents send pictures or movies forbidden to people under 18 years of age.

Sending such messages has turned into normality among adolescents

Saligari met 13- or 14 year old patients who saw sending pornographic messages as normal. Girls were convinced that such behavior is normal, as long as adults do not know anything about their habits.

For Saligari, this is really a problem of our century and believes that urgent action must be taken to combat this addiction.

He reports that parents are no longer able to temper their children in terms of using their mobile phone. His studies show that 4 out of 10 parents fail to prevent their own children from using their smartphone. And things seem to get worse, because even younger children, six years, handle the tablet or mobile phone extremely well.

The best way to stop this addiction.

Saligari and Graham argue that the best way to prevent and combat mobile phone deceptions is to introduce a rigorous set of rules, both at home and at school.

This program is called “smartphone anesthesia” and requires the use of a mobile phone only when needed. Certainly children and adolescents will initially make a crisis similar to any addict, but it will gradually disappear. The two say parents need to be very firm and not give up the crying or whining of the children.

You can still save the childhood of your son or daughter, do it too!