Warning: "continue" targeting switch is equivalent to "break". Did you mean to use "continue 2"? in /home/asmc/public_html/stopautismvirtual.ro/wp-content/plugins/revslider/includes/operations.class.php on line 2758

Warning: "continue" targeting switch is equivalent to "break". Did you mean to use "continue 2"? in /home/asmc/public_html/stopautismvirtual.ro/wp-content/plugins/revslider/includes/operations.class.php on line 2762

Warning: "continue" targeting switch is equivalent to "break". Did you mean to use "continue 2"? in /home/asmc/public_html/stopautismvirtual.ro/wp-content/plugins/revslider/includes/output.class.php on line 3706
 About Virtual Autism, the new affection that children addicted to computer, tablet and phone develop, along with Prof. Dana Craiu, pediatric neurologist at „Obregia” Hospital. – Stop Autism Virtual Skip to content

About Virtual Autism, the new affection that children addicted to computer, tablet and phone develop, along with Prof. Dana Craiu, pediatric neurologist at „Obregia” Hospital.

Previous Next
About Virtual Autism, the new affection that children addicted to computer, tablet and phone develop, along with Prof. Dana Craiu, pediatric neurologist at „Obregia” Hospital.

About Virtual Autism, the new affection that children addicted to computer, tablet and phone develop, along with Prof. Dana Craiu, pediatric neurologist at „Obregia” Hospital.

Computer addiction is like a drug that affects children at younger age. Children who spend a lot of time in front of their phone, television or tablet screens may develop virtual autism. These children get angry and when called to eat, they stop responding when they are called, do not react to strong sounds and do not communicate. That is why parents have to give up first of all the habit of staying on the phone for a long time and find active programs involving family, friends, knowledge, says for „Libertatea” news paper, Professor Dana Craiu, pediatric neurologist at Clinical Hospital of Psychiatry “Alexandru Obregia”. 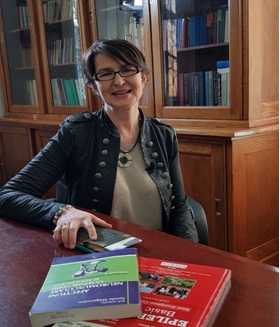 Virtual autism, a new affection that develops in children addicted to phone and computer

The name of virtual autism was given by a group of specialists who say that, at first, the symptoms are the same as those of the classical disorder. The difference is that these children do not have hereditary problems but suffer from a lack of communication. Fortunately, they recover fully and quickly if the condition is discovered in time.

Specialists speak of virtual autism when referring to children who look a lot on television, are staring at their phone or tablet.

“The problem is that this technology, which is so useful in many areas of activity and very useful to us as doctors, for example, that it helps us to have quick access to the latest scientific information on the planet, must be able to be used judicious. We should be cautious, because children can become addicted. It’s like a drug, but unfortunately they gain access very early. Psychiatrists are considering this new pathology and are even people specialized in the treatment of addiction, “says Dana Craiu.

Computer and telephone addicted children are confident, they do not want to go out in the park, they build a world of theirs

For neurologists, the problem of child and adolescencent computer addiction is at the beginning, but they recognize that adolescents who lose their nights in front of an intermittent light stimulus computer may have an epileptic seizure, if they already have this illness or predisposition for this suffering.

“In neurology, this aspect is still studied. Specialists analyze the brain’s response to this type of addiction. So, it’s in the study. What we can see, however, is how their personality changes. Computer addicts, phone or tablet addicts are upset, and when you call them to the eat, they are upset and quarrelsome. Unfortunately, they are building a whole world of their own. They hear all kinds of voices talking on the computer, and they no longer enjoy going out in the park, going to parties, “says the pediatric neurologist.

Dana Craiu tells that when she spoke to her students about the causes that could lead to epileptic seizures in adolescents, they indicated computer dependence rather than parties and nights lost at the disco.

“My students looked strangely at me, without reaction, when I listed the causes in adolescence that can lead to epileptic seizures – in people who have a genetic predisposition to this disease – and I told them who is losing nights, drinks because he went to the party and the party is eventually at a disco, with a strobe, a device used to produce pulsating light. It was like not recognizing this pattern. But when I gave the pattern of the teenager losing the night in front of the computer with flashing stimulation to the games, everyone said” yes, yes, that’s it”. Therefore, alternatives must be found to take the young people out of the house. In America, for example, all kinds of activities are being done at school, in society. They’re doing things with people. There are all sorts of activities, “Father’s Day”, Mother’s Day “, all sort of days. And to get out of the house, to interact and to have social activities, otherwise we lose them “, explains Dana Craiu.